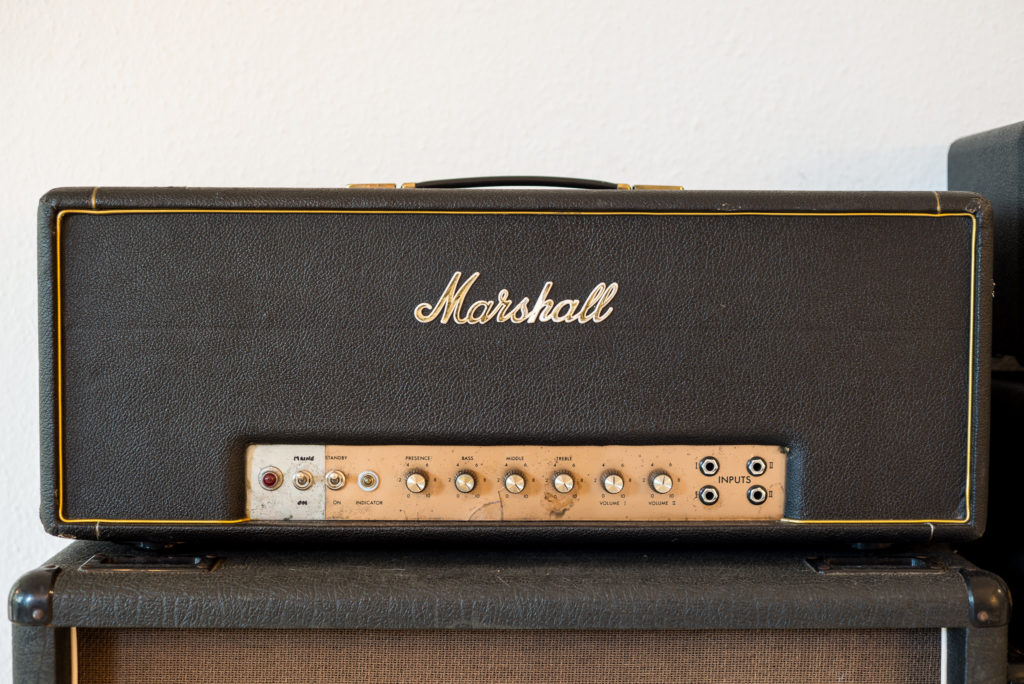 This Marshall Major is another amp from the Gary Moore collection and has a very interesting history. According to Gary’s guitar technician Graham Lilley “This amp was acquired for the BBM tour in 1994 and used on a handful of early shows, until replaced by regular 100 watt SLP59 Marshall amps. It has recently been at the Marshall factory, as part of their ongoing archive project.”

The Marshall Major (aka ‘The Pig’) was a 200-watt version of the Superlead introduced in 1967 for players who needed exceptional volume. In this period guitarists used their stage amps for their volume, rather than relying on a venue’s PA system. The Major was indeed loud but also somewhat delicate internally, operating as it did on the edge of peak performance. It was discontinued in 1974, after being used onstage and in the studio by players such as Mick Ronson, Ritchie Blackmore and John Entwistle.

The following cannot be 100% confirmed but is still highly interesting. Gary Moore purchased this amp from a music store in Edinburgh around 1992. The person who owned the amp before Gary, found it in the basement of The Apollo Theater in Glasgow in the early 70’s (not long after Deep Purple played there). It had been badly damaged. This person restored the amp to its original condition and then sold it to Gary some years later. While he was restoring the amp, he noticed it had been modded in a very specific way. The modification was exactly the same, as famed amp tech Dawk Stillwell, used to mod Marshall Majors. Dawk Stillwell made these mods exclusively for none other than Ritchie Blackmore. The person who restored the amp believes there could be no other explanation other than this amp is ex-Blackmore. Sadly, the only person who could confirm this story, Dawk Stillwell, is no longer with us.

Still, it is fun to think of the history behind this amp, and whether or not it used to belong to Blackmore, Gary Moore definitely did use this amp for the BBM project in 1994. I’ve always wanted a Marshall Major, and this amp definitely lives up to the expectations of the most powerful Marshall ever made!